by Canadian Biotechnology Action Network
The Claim: We need GM crops to feed the world
Supporters of genetically engineered (also called genetically modified or GM) crops claim that we need this technology to feed a growing global population. However, the promise to “feed the world” with GM crops overlooks the real causes of hunger, and disregards the many harmful impacts of using GM technology.
The Real Problem
The claim that we need GM crops to feed the world ignores the real, root problem: Hunger is caused by poverty and inequality.
We don’t need GM crops to feed the world
1. The GM crops on the market today are not designed to address hunger
2. GM crops have not increased yields
Crop yields have not increased because of GM traits. In the US, for instance, yields of herbicide tolerant soy and corn did not increase in the years after GM was introduced. In India, GM cotton failed in many parts of the country, causing terrible hardship for farmers. Overall, conventionally bred (non-GM) varieties are more effective, less costly to develop and cheaper for farmers.
3. GM crops have not increased farmer incomes
Farmer incomes have not increased as a result of GM crops. This is because GM traits have not significantly improved yields, and because the cost of patented GM seed is much higher.
4. GM crops have increased pesticide use
Pesticide use has increased, rather than decreased, with the use of GM crops.
The extensive use of Roundup has led to the emergence of weeds that are herbicide resistant. There are now 28 weeds worldwide that have developed resistance to glyphosate; 14 of them are in the US, and four in Canada. By 2012, 20-25 million acres in the US were infested with glyphosate resistant weeds.
The use of insect resistant (Bt) crops in the US has reduced the use of chemical insecticides by 123 million pounds. However, the Bt plants themselves produce an insecticidal toxin that is not quantified, and may have negative environmental impacts on soil and non-target organisms.
5. GM crops are patented and owned by large companies
GM seeds are patented, owned and controlled by a small handful of large multinational corporations.
Companies profit from sales and royalties on GM crops even when people do not have access to food. Instead, small farmers around the world bear the risks that come with using GM crops. In addition, due to corporate control in the seed market, farmers are often unable to buy non-GM seed.
Relying on profit-seeking corporations to provide technological fixes to our most pressing global problems forces farmers and consumers into positions of vulnerable dependency.
The Real Solution
Hunger is a social and political issue. To stop hunger, we need to address its root causes, and get control over our farming and food systems back into the hands of farmers and communities, instead of private corporations.
Food Sovereignty is the right of all peoples to healthy and culturally appropriate food, produced through sustainable methods, and the right of people to define their own food and farming systems.
Farmers and other experts around the world are calling for diverse, sustainable and community-based agricultural development. Agro-ecological food systems have incredible potential to produce enough high-quality food for all, while also supporting rural communities, building biodiversity and addressing climate change. There is no place for GM crops in an ecologically sustainable and socially just food system.
Download the full report (550kb PDF)
Further Reading:

Posted by Growing_Community_Naturally at 5:53 PM No comments:

The Boulder Forest Garden Indiegogo Fundraiser was a Success!

We raised $3646.00 to go towards building the Boulder Forest Garden.  Thanks to everyone who donated or shared the campaign.  We are working on sending out the incentive gifts to donors.

The Boulder Forest Garden received its first grant!  We were awarded $1000 from the Elkhorn Community Foundation.  It is exciting to receive our first grant from a local foundation.   We appreciate the support!

We also had another work day at the site.  Montana Conservation Corp. helped us for a second day as we put in more fence posts.  We are almost ready to put the fence wire up.  We also started cleaning up the dead cottonwoods in the area and piling them to be used to build hugelkulture (woody, raised growing beds).  Thanks to all the dedicated volunteers who showed up to help and those behind the scenes helping with meals and drinks for the work crew.

If you are interested in volunteering or donating please contact Susie at hartmanpeople@ymail.com to sign up.  We also need donations of healthy food and snacks for work days. 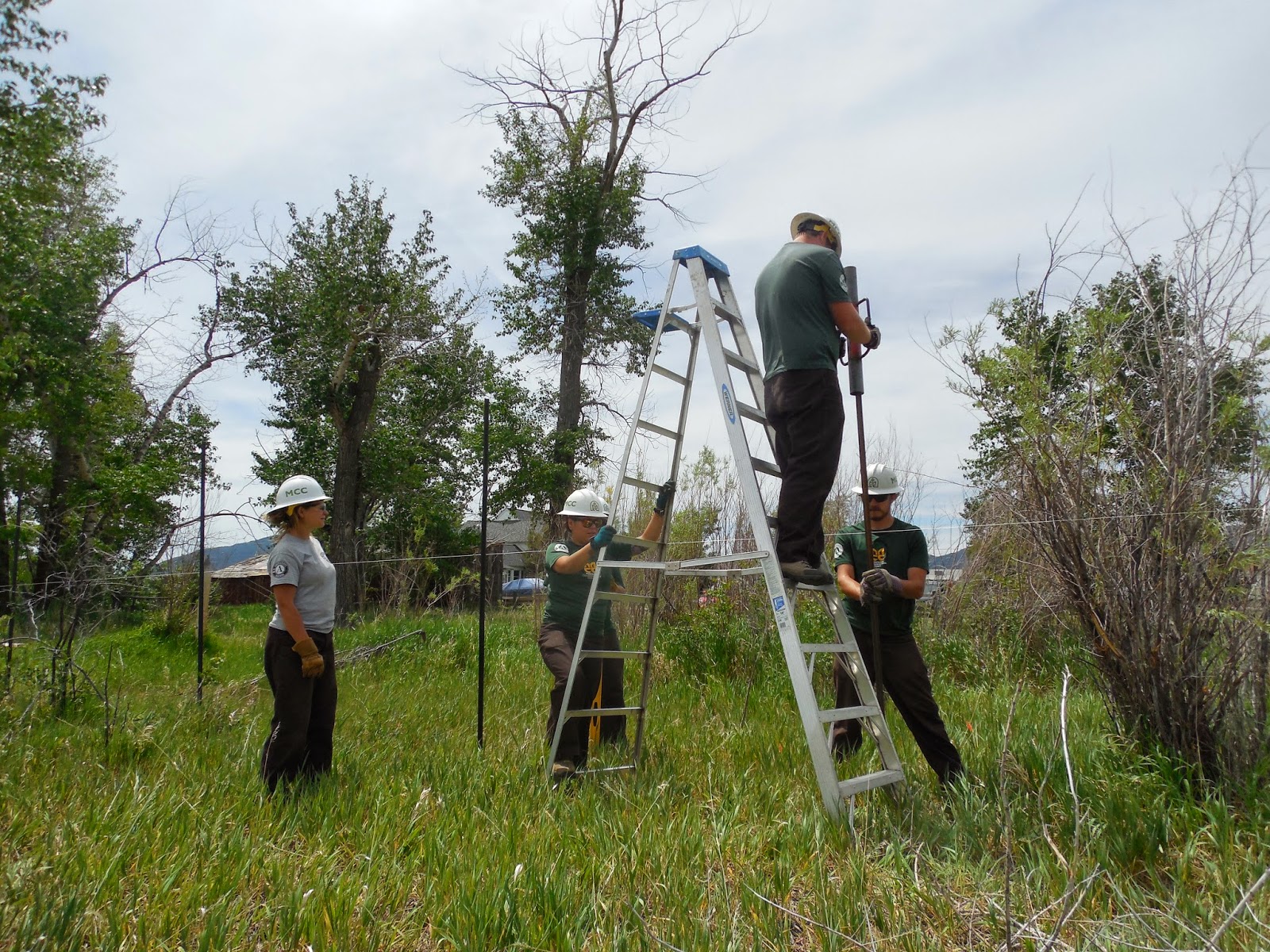 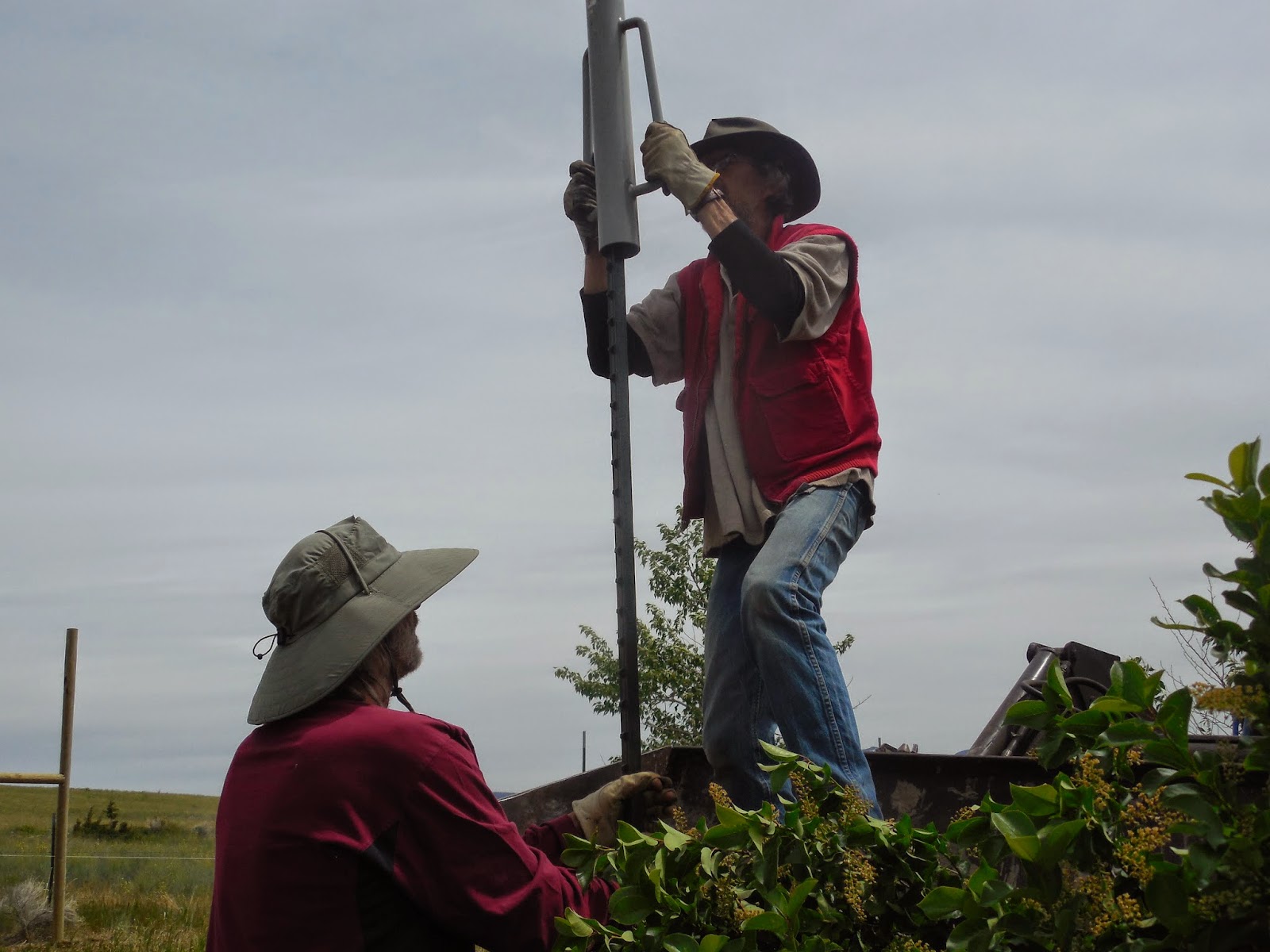 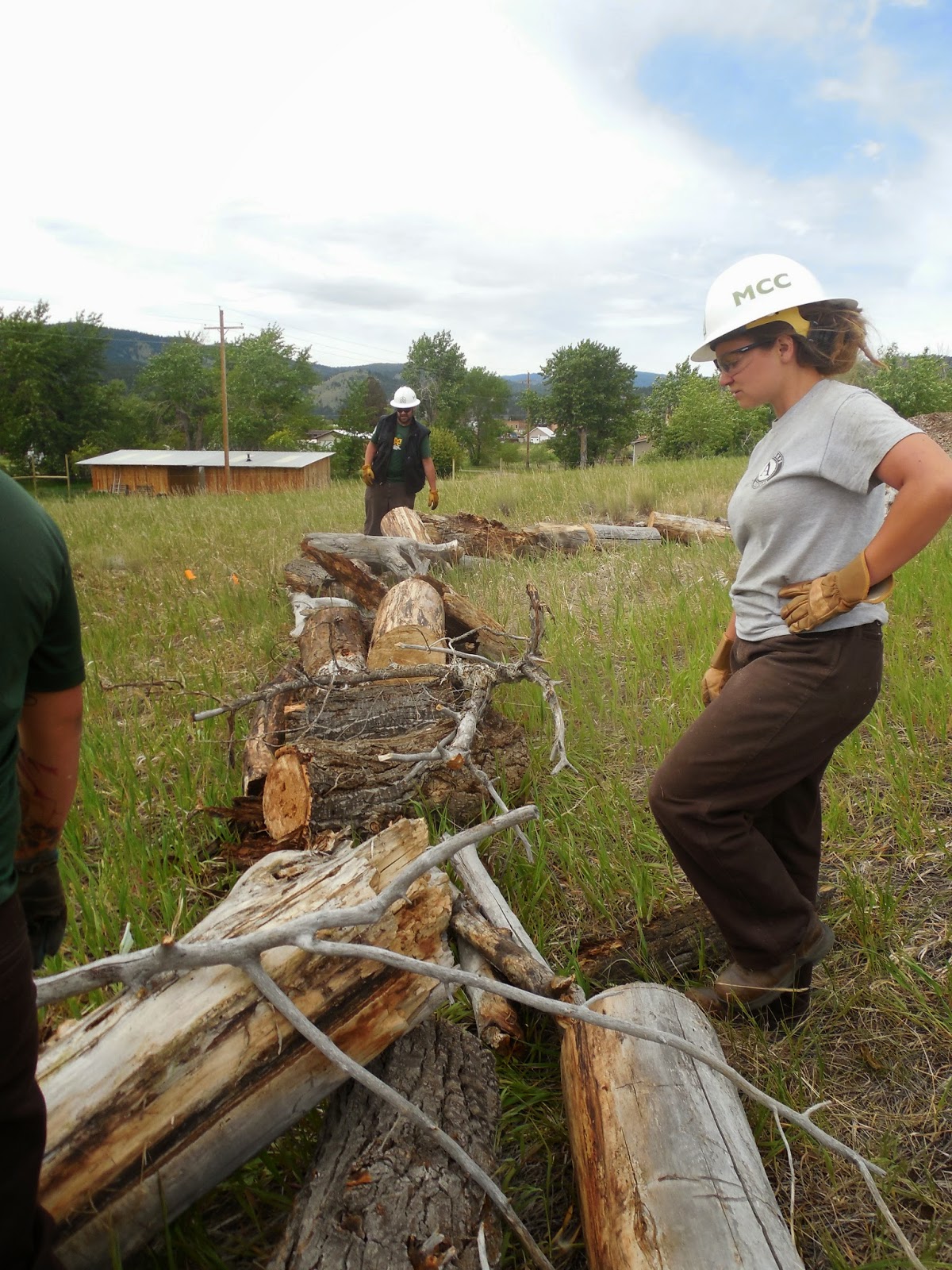 Posted by Growing_Community_Naturally at 5:33 AM No comments:

The Clock is Ticking. Please Donate to the Boulder Forest Garden Today!

It is the final days of our Indiegogo fundraising campaign.  We hope to meet our goal of $3500 to fund the irrigation system and purchase plants for the garden.  Small donations really add up so consider donating even $5 to the campaign.  Thanks for your support!


Posted by Growing_Community_Naturally at 6:07 AM No comments:

Twenty people turned out to put fence posts in the ground at the Boulder Forest Garden.  Donated use of two tractors and augers to drill holes made the job easier.  Our appreciation goes out to Cory and Dave Kirsch, Tom and Deborah Colella and Ed McCauley for the drilling equipment.   The wood posts are 12' tall and the metal t-posts are 10' tall so it was a bit of a challenge.   Thanks everyone and please come back for round two! 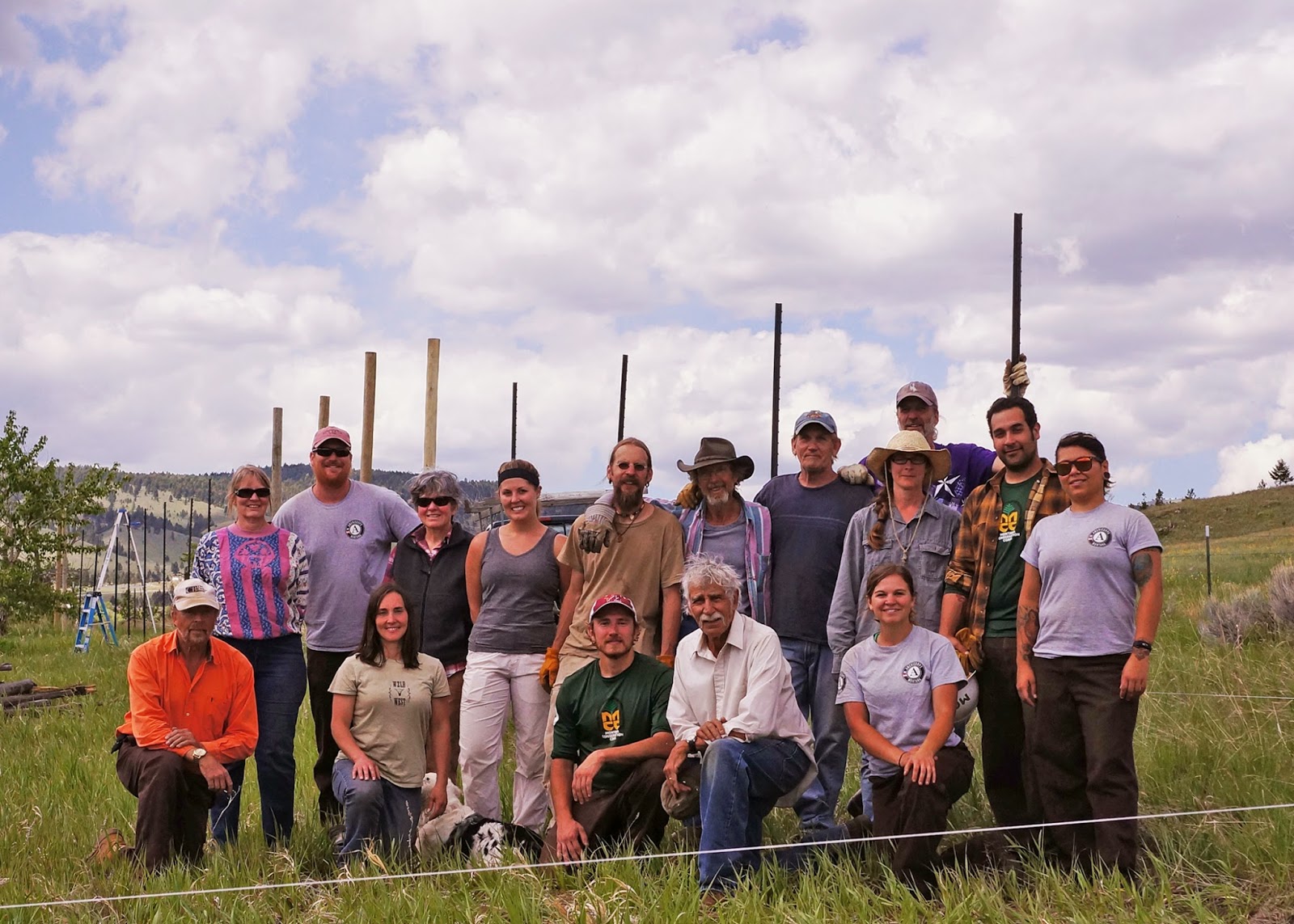 Posted by Growing_Community_Naturally at 5:47 AM No comments:

We spent the afternoon removing and rolling up old barb wire and pulling fence posts.  The new fence posts will be installed next week! 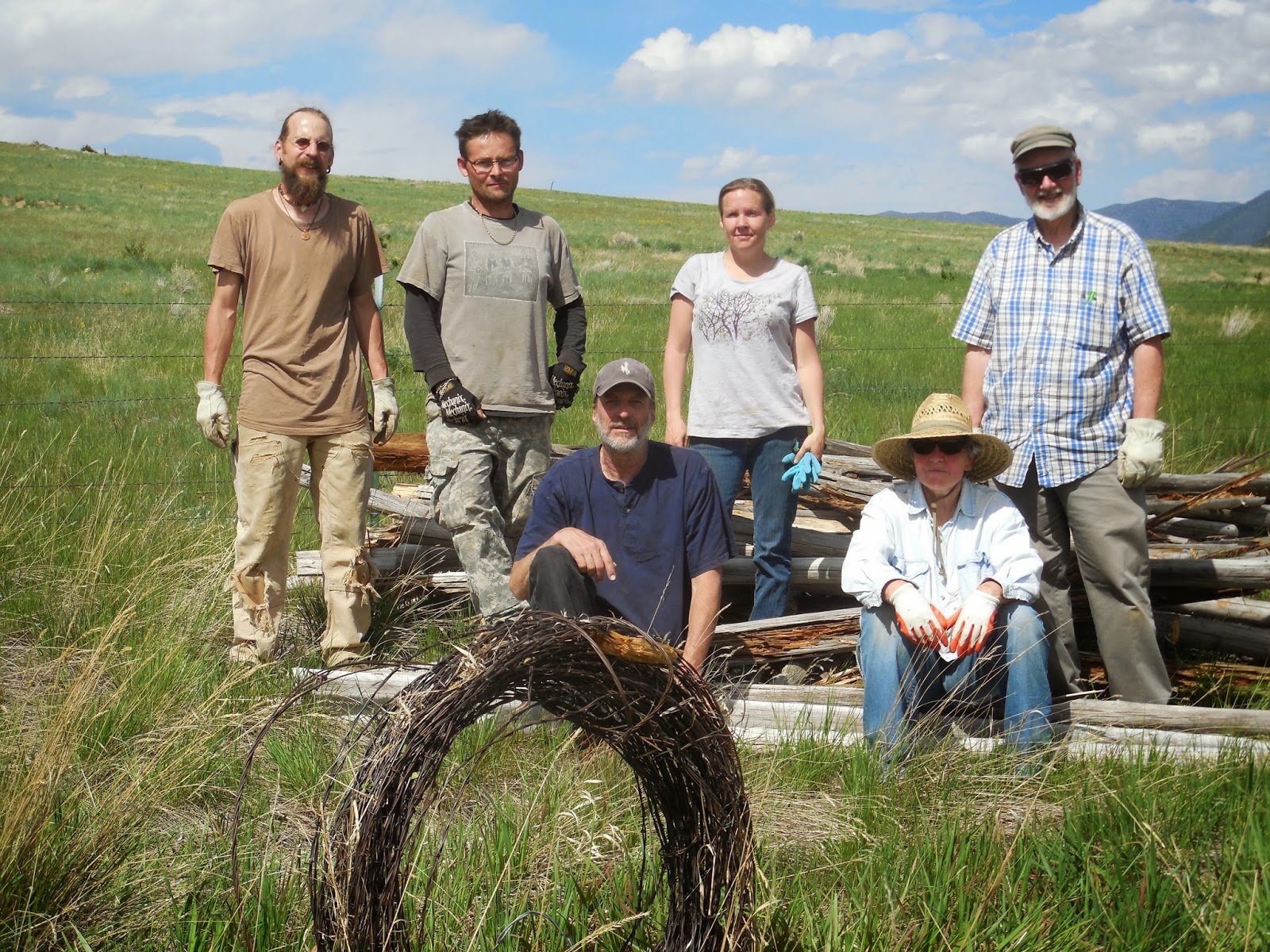 Posted by Growing_Community_Naturally at 6:26 AM No comments:

Click Here to Donate to the Boulder Forest Garden

Posted by Growing_Community_Naturally at 8:44 AM No comments:

Check out our upcoming event! 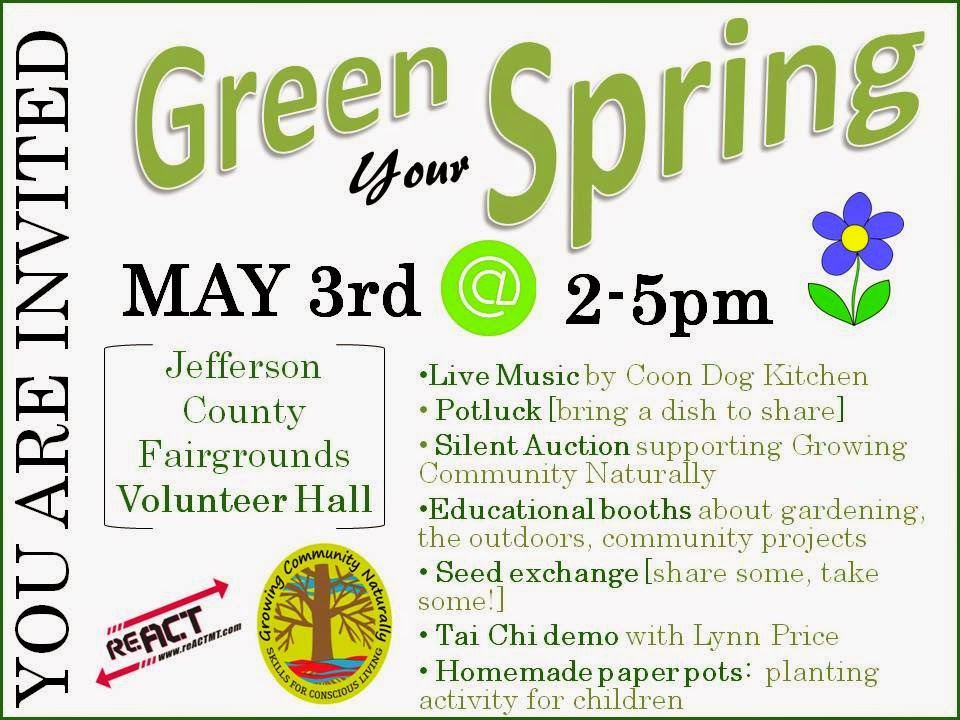 Posted by Growing_Community_Naturally at 10:09 AM No comments:

Our monthly meeting will be held on Tuesday, April 8th from 6 - 7 p.m. at Boulder Elementary School. See you there!
Posted by Growing_Community_Naturally at 9:56 AM No comments: Why are thousands of physicians advising patients to avoid eating GMOs (Genetically Modified Organisms) [1] and how did these high-risk foods get onto the market in the first place? The answers are disturbing, even shocking, but may help you get healthy and stay healthy.
Foods with added bacterial or viral genes were quietly slipped into your diet two decades ago. Using the excuse that GMOs weren’t that much different, the FDA didn’t require labels or even a single safety study from GMO makers like Monsanto. But a lawsuit forced the agency to release their files and the truth finally came out.

FDA scientists repeatedly warned that GMOs could create allergies, toxins, new diseases and nutritional problems, and that rigorous safety testing was needed. But the White House had instructed the FDA to promote biotechnology, and Michael Taylor, Monsanto’s former attorney, was put in charge of FDA policy. (Taylor later became Monsanto’s chief lobbyist, and has returned to FDA as US Food Czar.)
Can you trust Monsanto with your family’s health? That company that told us that Agent Orange, DDT and PCBs were safe.
Now Monsanto’s “Roundup Ready” crops are engineered to withstand their Roundup herbicide, which gets absorbed into the food and can’t be washed off. A 2014 study found Roundup the most toxic of all herbicides and insecticides they tested. According to MIT scientist Stephanie Seneff, Roundup may be “the most important factor in the development of multiple chronic diseases and conditions.” She co-authored a seminal paper linking it to obesity, heart disease, inflammatory bowel, IBS, autism, allergies, MS, Parkinson’s, depression, infertility, Alzheimer’s and cancer.
Some GMOs, e.g. corn, have built-in pesticides that break open holes in the stomach of insects. A 2012 laboratory study confirmed that the toxin opens holes in human cells. And a Canadian study found both the toxin and Roundup in the blood of most pregnant women and their fetuses.
If you don’t trust GMOs, you’re not alone. According to a 2013 survey by Hartman Group, over 120 million Americans say they try to avoid them. That number has more than doubled since 2007. [2]

When people eliminate GMOs, they (and their physicians) often report more energy, weight loss, better digestion, reduced allergies and skin conditions, and relief from numerous chronic conditions. [3] Veterinarians, farmers and pet owners describe similar improvements with animals taken off GMOs. According to a research review by the American Academy of Environmental Medicine, many of these disorders also afflict lab animals fed GMOs. We believe it is not a coincidence that the rise of these types of health issues in the US population parallels the use of GMOs and Roundup.
In addition to the health dangers, independent studies also show that GMOs don’t increase yields, don’t solve world hunger and massively increase herbicide use.
GMO advocates aggressively deny any evidence against them. According to Nature, a “large block of scientists [...] denigrate research by other legitimate scientists in a knee-jerk, partisan, emotional way.” Tactics include threats, gag orders and termination.
The industry’s own research, on the other hand, is widely criticized as “tobacco science,” carefully designed to cover up problems. And just as a Monsanto man guided FDA policy, GMO review committees worldwide are often stacked with industry representatives who rubber stamp approvals or declare GMOs safe by ignoring data to the contrary.
Now the FDA is considering approval of GMO salmon, as well as allowing GMO mosquitoes loose in the Florida Keys. In fact, countless GMO plants, animals, fish, insects and bacteria are being developed in labs around the world. Each could irreversibly contaminate the gene pool.
Before we replace nature, let’s demand independent, comprehensive long-term safety studies. Until then, stop feeding us the products produced by this immature science.
References:

Posted by Growing_Community_Naturally at 6:27 AM No comments:

Our monthly meeting will be held on Tuesday, February 11th from 6 - 7 p.m. at Boulder Elementary School. See you there!
Posted by Growing_Community_Naturally at 8:10 AM No comments: